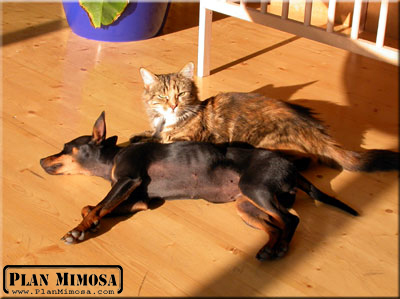 In September 2002, we welcomed a small female Miniature Pinscher (Zwergpinscher), then aged 2 months. 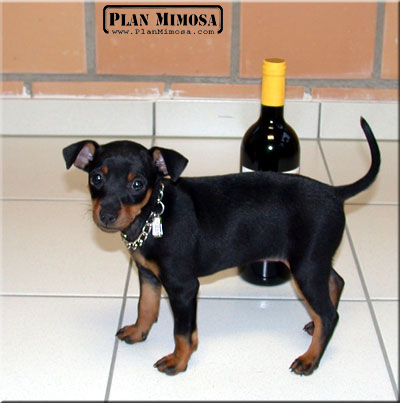 At the age of 2 months 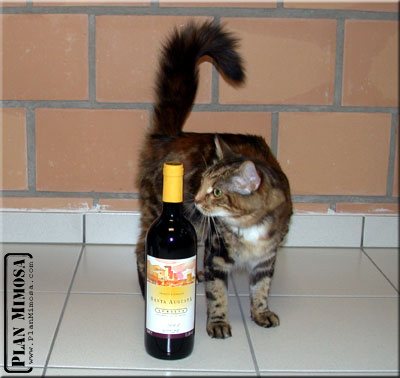 Didi was much taller than Alcaline 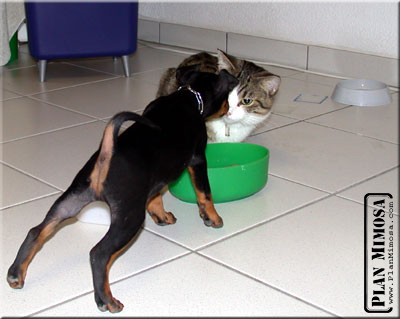 I carefully studied several breeds before opting for the Pinscher, whose characteristics have immediately seduced me. 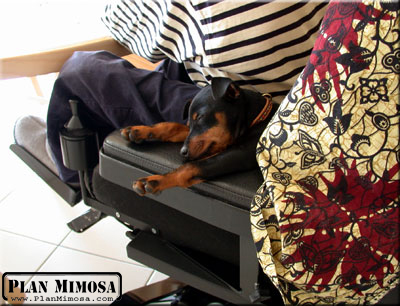 Alcaline is taking a little nap

During its growing phase, I gave Alcaline the habit to sleep in its basket or on my wheelchair, and nowhere else. 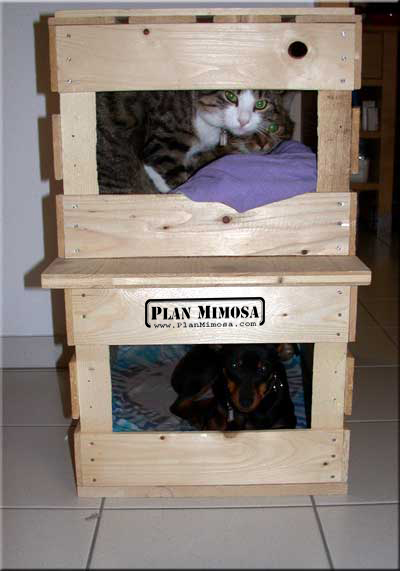 We made this niche with two apple crates. To make the cats sleep over the dog helps counteract the very dominant nature of Alcaline. 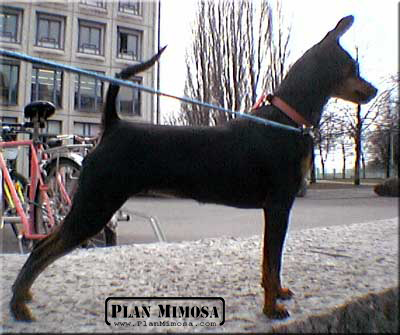 Then aged 7 months, Alcaline has the characteristic shape of the Pinscher. Later, being adult, the belly will retract somewhat and the rib cage will expand… You’ll see other photos in future articles.

The few knowledge I have about dog training come from different readings. This allowed me to educate Alcaline in very soft way, for a truly satisfactory result. In parallel, in order to exercise certain acquired in a more challenging environment, but also to confront our dog to a maximum of other canids, we regularly participate in canine socialization sessions.

Alcaline and Mirabelle are on the right hand

For obvious reasons of mobility, Mirabelle takes Alcaline in charge during this activity.

Alkaline is the smallest dog to participate, but she still remains the fastest! This does not fail to gain the respect of those who, in principle, make fun of such a small dog. Moreover, most large dogs try to catch Alcaline, but in vain, which does not fail to frustrate them 😉 One day, I’ll try to film one of those funky moments 😀

One of the striking features of the Pinscher is his passion for the heat. Alcaline went regularly under the window, in direct sunlight, during the 2003’s heat wave.

The Pinscher love the Sun
Adult, Alcaline is roughly the same size as Didi

Another similarity with felines which is very valuable in the Pinscher: It cleans itself as a cat would, which is not the case of all dogs 🙂

Well, obviously I’ll write more articles about this little animal with a huge heart, especially to show and explain you how and why Alcaline is already able to recognize and “execute” about twenty different orders!

As English is not my first language, please help me to improve, by reporting the biggest mistakes by email…

Thank you for following our adventures!